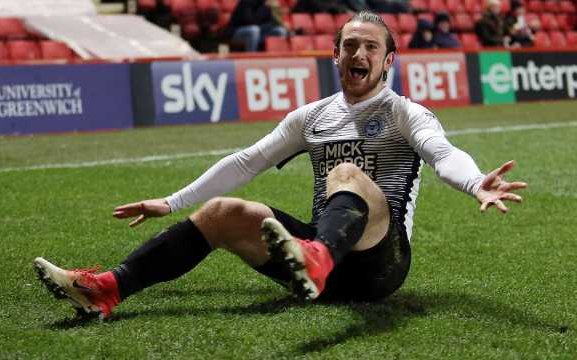 Peterborough United have finally confirmed that Championship side Derby County have had a bid accepted for 33-goal striker Jack Marriott.

Marriott was due to play against Gainsborough Trinity last night for Posh but was pulled out at the very last minute after the bid had come in. The 23-year-old is expected to complete a medical and finalise the terms on his contract today.

The deal is said to be close to £5 million including add-ons which will be a nice tidy profit for Posh who picked Marriott up from Luton Town for just £450,000 last summer. The Hatters will also take a slice of the money from the sell-on clause inserted into Marriott’s Posh contract. Unconfirmed reports suggest the undisclosed fee is made up of an initial up-front payment of £3 million with the rest made up of add-ons.

Depending on when everything is completed, Marriott could make his debut as early as tonight when the Rams play Coventry City. However, it is likely that he will make his debut on Saturday though in the home match against new Premier League side Wolverhampton Wanderers.

The question on the lips of all Posh fans now is who will Posh bring in to replace Marriott?

There have been no end of names bandied about linking this striker and that striker to Posh but have Posh already got a replacement lined up?

Two of the strikers previously linked with Posh can be ruled out after Mo Eisa signed for Bristol City while Bradford City’s Charlie Wyke will be out of action for around six weeks. There again, would an injury rule out a move by Posh?