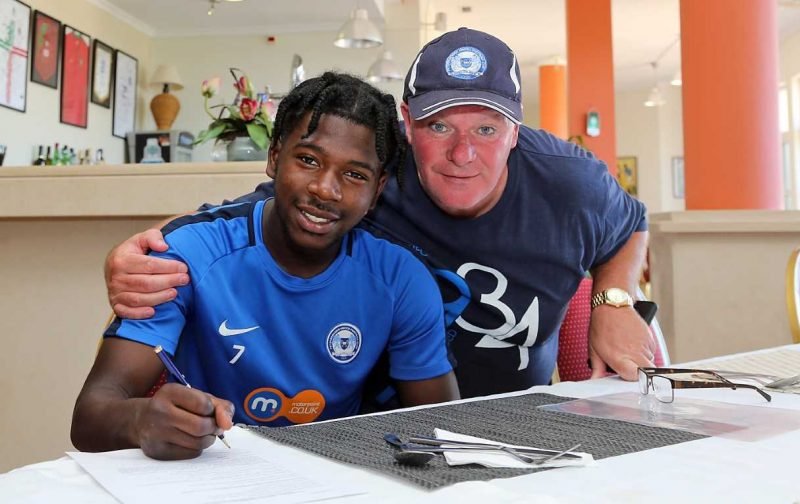 Peterborough United have made their FOURTEENTH signing of the summer after announcing Manchester City’s England Under 19 winger Isaac Buckley-Ricketts had agreed terms on a three-year contract.

The 20-year-old is already in Portugal with the Posh squad but the deal couldn’t be announced until the finer details to the transfer were agreed. One of those terms was a clause allowing City the option of buying back the 2017 UEFA European Under-19 Championship winner. As usual, the fee is undisclosed!

Buckley-Ricketts has had two loan spells away from the Etihad Stadium, firstly at Dutch side FC Twente and then at League One side Oxford United during the latter part of last season. It’s fair to say his loan at Oxford was less than successful and this is something highlighted by Chairman Darragh MacAnthony when he announced the signing on Twitter:

Posh boss Steve Evans also explains why he feels Buckley-Ricketts didn’t have a successful time at Oxford: “He has had a brief loan spell out at Oxford but it is fair to say that Manchester City and Peterborough United probably have ideas to play the boy in a similar way compared to what was a little bit foreign to him when he played at Oxford and that isn’t a criticism, it is just systems of play.”

With Gwion Edwards departing to Ipswich Town and Marcus Maddison also expected to depart the club, Buckley-Ricketts will now challenge newcomer Siriki Dembele and last seasons new recruits George Cooper and Joe Ward for a place on the wing. He likes to use his pace to create and score goals and compares himself to Raheem Sterling! Read what both Buckley-Ricketts and Steve Evans have to say on the Official Posh website.