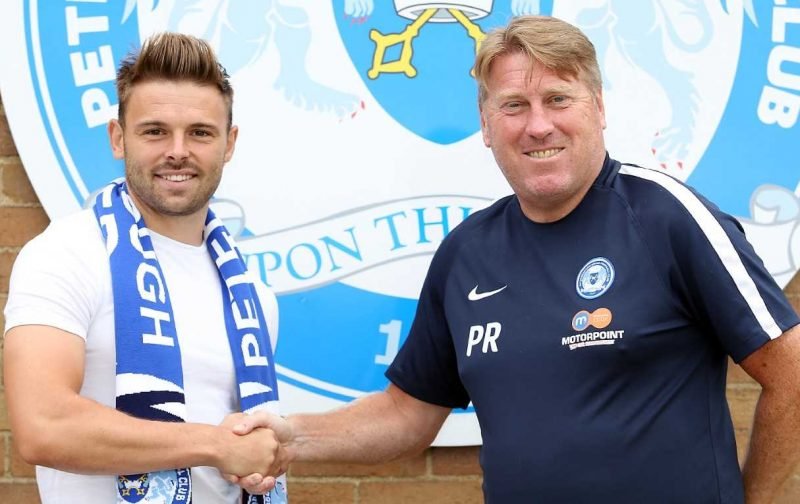 After failing to agree terms last week, Stevenage striker Matty Godden has had a re-think and decided to sign for Posh!

Initial reports suggested Godden’s agent was the stumbling block but after Posh boss, Steve Evans, spoke again to the forward on Friday, it appears the 26-year-old has had a change of heart. Soon after that chat with Evans, Godden rang back to say he’d like to sign for Posh if we still wanted him!

“We have had meetings with him and his representative many times over the last few weeks and as everyone knows, it looked like it had fallen through, but perseverance sometimes is the order of the day and I spoke with Matt on Friday and it was brilliant, we just talked about football,” said Evans to the Official Posh website.

“I told him to go home and have a chat with his family and see what he thought and I was absolutely delighted to get a call from Matty soon afterwards saying that if we still wanted him, he would be thrilled to sign.”

We don’t know too much about the striker but we didn’t know anything about Jack Marriott when he arrived from Luton Town last summer either.

Looking at the stats, he scored 14 goals in 44 matches in all competitions last season and 35 goals in 87 games since he arrived at the Lamex Stadium on a free transfer from Ebbsfleet United.

Godden has taken the long road to professional first-team football, having failed to break through at his first club Scunthorpe United after being hampered by persistent injury. Despite failing to make a true impact at the Iron, Godden made sure to get some experience in “the more physical and demanding” side of football on loan at non-league clubs such as Brigg, Gainsborough, and Tamworth.

In 2014, the Iron wanted to take up an option to keep Godden after his original contract finished but the forward decided to drop down three divisions instead to sign for Ebbsfleet; something that Posh Chairman Darragh MacAnthony likes to see when players haven’t made it in the League.

The second season at Ebbsfleet was very productive as he notched 30 goals in 45 matches before switching to Boro. Fast forward two seasons and Godden now finds himself back in League One but this time with Posh.

He was highly recommended by former Posh forward Aaron McLean who played alongside him at Ebbsfleet who also gave his former strike partner a glowing reference of Posh.

As well as the recommendation by McLean, there have been plenty of Stevenage fans who are disappointed to see him leave feeling we have got an excellent player on our hands. Let’s hope he is as good as they’re all saying and hits the ground running.

Godden has signed a three-year deal at the ABAX Stadium for an undisclosed fee although Sky Sports News has reported the fee to be in the region of £400,000.