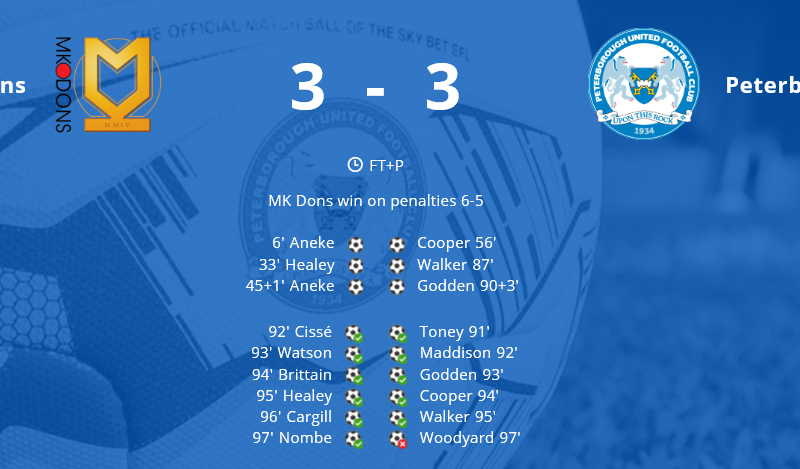 It was the opening match in the group stages of the little supported Checkatrade Trophy and amongst a sparse crowd, it ended as a ding-dong battle!

After a first-half that looked as if League Two MK Dons would run away with things, the second-half was a much different story.

Posh were so poor defensively for the second Cup tie of the season in those first 45 minutes and deservedly trailed at the break. By that time they’d shipped three goals whilst at the same time, fluffed the few chances that came their way.

Tyler Denton had his second start of the season and was once again poor. Some Posh fans wanted him to go back to his parent club Leeds United after that initial match so after yet another woeful performance, they certainly won’t have changed their mind!

The home side struck three first-half goals, the first two of which were headers, with the only bright note for Posh coming from Louis Reed who struck the post late on in the half. Isaac Buckley-Ricketts made a rare appearance and was provided with one glorious chance to score but somehow missed the target when it was easier to score!

If Posh fans thought they had strength in depth in their squad, then the first-half suggests that that is far from the truth. Callum Cooke was withdrawn during the first-half through injury while Buckley-Ricketts was withdrawn after making his debut last just 45 minutes! Both fullbacks flopped massively with Lyon making his debut while the main Posh threat from midfield and up front were working off scraps.

Posh boss Steve Evans must’ve given the team a rollicking at half-time while making one change at the break with the disappointing Buckley-Ricketts making way for new loanee signing Jamie Walker and what a difference he made.

An excellent freekick from George Cooper gave Posh hope after 11 minutes of the second period as the visitors put on the pressure. Posh managed to get Marcus Maddison on the ball more in the second period and he put in some delightful balls which Jack Marriott would’ve benefitted from last season. Unfortunately, the new frontline aren’t as switched on as Marriott was although, having not played together very often, they probably aren’t aware of how dangerous his crosses can really be if only they made early runs.

With two goals down going into the final five minutes, it looked as though the match was well and truly lost despite the second-half dominance of Posh.

That was until Walker scored a debut goal with three minutes remaining following excellent work from Tyler Denton. Walker was really unlucky not to get more than one debut goal especially as one effort hit both posts!

Another substitute managed to snatch a point deep into added time as Matty Godden added to his four goals he’s scored this season.

It was the home side that finished the match with two points though after winning the penalty shoot-out. Both sides had scored all five of their penalties, although Posh keeper Conor O’Malley should’ve done better with a couple of them. Sadly, captain Alex Woodyard then saw his penalty saved with MK scoring their corresponding one.

Overall, it was a very poor performance by Posh in the first-half but they could’ve won it in the end. They created so many chances in the second period, they’ve could’ve actually run away with the match!

If Evans blocks out that first 45 minutes, he may have a few decisions to make leading up to their match on Saturday when they travel to Southend United!

What did you think of the performance of the Posh players? Rate them below: