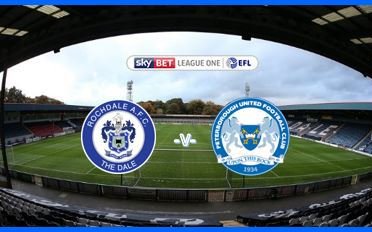 What do you think the score will be in the Sky Bet League One match between Rochdale and Peterborough United on Saturday?

Both sides won on the opening day of the season last weekend with Posh comfortably beating Bristol Rovers two-one while Dale also won by the scoreline at Burton Albion who were relegated from the Championship last season.

Posh were the first scorers of the League campaign for the 3 pm matches as the opened the scoring with less than 60 seconds on the clock! They doubled their lead midway through the first-half and while they didn’t create too much after that, they easily saw off the threat of Rovers…that is until the third minute of added time!

Rochdale also went two-goals up with both goals being scored by former Posh midfielder Brad Inman who made the switch from the ABAX Stadium to Spotland during the summer. Like Posh though, their total number of shots during the match was very low and the only shots they got on target went in!

Dale will obviously want to start their home campaign with a victory and will be hoping to replicate their score against Posh from last season. Two goals in a three-minute spell just after the half an hour mark was enough to seal all three points. The match also saw Keith Hill celebrate his 500th game in charge of Rochdale!

Will Rochdale continue their winning start to the season or can Posh pick up at least a point to build on their opening day victory?

What do you think the score will be? Predict the score .

The poll is open until midnight on Friday, 10th August. We will let you know the results on the morning of the game.